The year 2021 started with Korea still very much in the grip of the pandemic. Two animated features -- Pixar's Soul and Demon Slayer from Japan -- breathed some life into the box office, but otherwise it was mostly doom and gloom throughout the winter and spring. On the festival circuit, Hong Sangsoo's Introduction won a Best Screenplay award at Berlin, and of course Youn Yuh-jung became the first Korean actor to win an Oscar, with her acclaimed performance in the American film Minari. But in late spring the industry's long-awaited recovery was still absent, amidst a delayed vaccination campaign and uncertain prospects for the summer months.   (Written on May 11)

I will not begin this view by enumerating how many movies with the title Three Sisters already exist in the world. Probably more than a few, even if they are not all adaptations of Anton Chekhov's play. In any case, the films depicting three sisters with distinct characters living under the same roof and the conflicts generated among them seem to almost constitute a genre of its own. 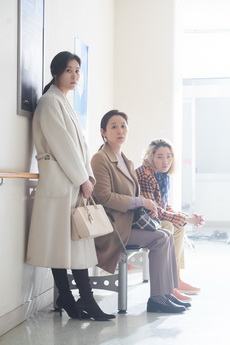 Director Lee Seung-won's new film makes use out of this familiar trope. The sisters here are played by Kim Sun-young (Miss Baek), Moon So-ri (Little Forest) and Jang Yoon-ju (Veteran), respectively. As you might have guessed at the outset, in this film the casting of these three actresses and the characters they play are far more important than any plot development. According to the grapevine, the original plan for casting had Kim Sun-young playing the youngest sister, indicating that the sisters had belonged to a noticeably older age cohort. However, casting of Moon, one of the biggest female stars in Korean cinema, as one of the sisters apparently necessitated lowering of their ages. By the way, director Lee is married to Kim Sun-young (they have been co-managers of a theatrical company for more than a decade).

None of the three sisters in this film is a spinster. They are married, yet, unfortunately, remain unhappy in different ways. Hee-sook (Kim), the eldest, has shrunken into herself, having to take care of an indifferent husband and a callous daughter. Mi-yeon (Moon), the middle sister, seems to be doing better, married to a college professor and volunteering for a church choir. However, she is quietly disintegrating inside as well. The youngest, Mi-ok, recently married to a much older spouse who runs a wholesale business, is a playwright suffering from a creativity draught. Their stories are told in parallel threads, despite their occasional visits to one another, until almost the one and a half hour point, wherein these threads rapidly converge into a knot.

To be honest, it is not always easy to be sympathetic to these characters. I have earlier stated that the sisters remain unhappy in different ways: but they are unpleasant in different ways as well. Their unhappiness reflects in many ways their own unique brands of self-deception, obtuseness and cruelty. Therefore, Three Sisters is best enjoyed when we observe their behaviors from a slightly detached, perhaps even sadistic vintage point, rather than attempting to fully emphasize with their (largely self-induced) plights. The acting prowess of the three excellent female performers is best showcased in articulating for us their unpleasant qualities and the sufferings generated from these qualities.

In a way, the film works best when approached as an exposé of moral hypocrisies, self-delusional violence and willful ignorance of some middle-class Protestant families in South Korea, with Mi-yeon in particular a fervent churchgoer and other family members unable to shake the influence of the Protestant Christian milieu on their lives. Anyone who has a traumatic experience with the dark side of this particular milieu might have to stifle a scream or shout of anger at several points while watching the movie. Director Lee's screenplay was either rooted in this world or incorporated a significant amount of input from those knowledgeable about what it was like to grow up in it (Lee describes himself as "someone who dabbled in churchgoing as a kid," and both Kim Sun-young and Jang Yoon-ju identify themselves as Protestant Christians. Ironically, Moon So-ri, who plays the most enthusiastic Christian believer, is a Buddhist in real life).

The film meets a turning point once the sisters visit their hometown to celebrate their father's birthday. The dramatic screw gets tightened, as the dark truths about their pasts are exposed. These secrets in many ways serve to explain their current unpleasant qualities, but the movie does not really subscribe to a neat cause-and-effect scheme: after all, there are other factors than childhood experiences that ultimately determine the trajectory of a person's life. At any rate, the explosive effects of these revelations lead to a suitably cathartic ending for the viewers, albeit one less than satisfactory for the characters themselves.

Personally, I feel that the movie could have expanded on the second half of the narrative. There are certain exhibitionist qualities to the lives of the three sisters presented in a detailed manner in the first half. The actresses give excellent performances in their respective roles, and the clinical, detached exploration of their lives undoubtedly piques the viewer's voyeuristic pleasure. Nonetheless, it would have been better if these superb actresses were given more chances to interact with one another. Such a choice could have opened up the characters, rather stiflingly arrested in their own shells throughout the film, to new possibilities. When all is said, this feels like a bit of a missed opportunity.       (Djuna, translated by Kyu Hyun  Kim)

Cha Yeon-hee (An Ji-hye, Our Body) is a young female stuntwoman. Born to an actor-father who never made it and having grown up in an orphanage, Yeon-hee dreams of nabbing a starring role in a movie by showing off her martial arts skills. After years of hard work and self-promotion, she is finally hired as a stand-in for the female star in a major film production. Having arrived in a supposedly haunted open set, Yeon-hee messes with what looks like a Joseon-dynasty version of a clapper (called "slate" in Korea), unwittingly opening up a portal into a parallel universe, wherein South Korea is apparently divided into feudal clans and overrun by sword-wielding gangs. Yeon-Hee is mistaken for a mythical superhero Demon Slayer by the harassed villagers and their "mayor" Jina (Lee Min-ji, The Vanished) and is pressed to defend them against the supervillain Tae Pyeong-so (Park In-soo, The Tiger) and his colorful underlings, including Priest (he is called "Priest" in Korean too: Lee Se-ho, The Boys Who Cried Wolf), a practitioner of black magic, Philip, a scowling backstabber (Park Tae-san, Ashfall) and Rattlesnake, a pigtailed cutie armed with poison-tipped knives (Nam I-seul). Complicating the matter is the fact that real Demon Slayer (Jo Sun-gi, Gang) has arrived at the village and is not about to let the imposter steal the limelight from him. 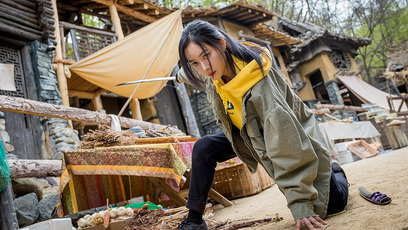 Slate is a brainchild of the young director Jo Ba-reun, noticed for his short film Vibration at the 2017 Bucheon Fantastic Film Festival, and previously helmed a grungy, no-budget schoolyard actioner Gang (2019). It is the kind of film both extremely Korean in flavor, orientation and attitude and rather unusual among the recently released roster of Korean films, in its seemingly incongruous mélange of an earnest, starry-eyed meta-cinematic fantasy about the joys and heartbreaks of filmmaking, a straight-laced low-budget martial arts action film in a low-rent Mortal Kombat mold and an equally heartfelt Bildungsroman centered on a heroine grappling with her desire to always remain at the center of the narrative.

Sounds more than a little naïve or even saccharine? Thankfully, Slate does not pour the sentimental sap all over the place as some other films of this kind are wont to. It is too busy arranging and presenting swordfights. The overall impression is a throwback to the kind of early '00s genre cinema, say, the early works of Ryoo Seung-wan and Jang Joon-hwan (both are referenced throughout the film: a YouTube paranormal researcher played by Jung Jin-woo is even dressed exactly like Shin Ha-gyun in Save the Green Planet!), graced with a similar type of can-do spirit and homespun action sequences. Jo even manages to thread through the movie a coherent theme, a sly but earnest criticism of the Social Darwinist philosophy of "only the strong deserves to survive," which many twenty- and thirty-something Koreans feel underlie the surface progressivism espoused by their so-called "586" generation elders, the Korean equivalent of "Boomers" in the US.

The characters are winningly plucky and positive in outlook. An Ji-hye, for whom Jo allegedly wrote the character of Yeon-hee, is quite attractive in the role of the heroine. She has the kind of crisp, fresh appeal that refuses to turn soggy even dipped in a melodramatic situation, and looks fabulous zipping and zapping her sword in a series of acrobatic moves without the help of a stand-in. I certainly hope to see her in many more, possibly bigger projects in the future. Unfortunately, Jo, like many of his Korean contemporaries, does not seem to know how to construct fascinating or riveting villains. They are all colorful (-ly dressed and coiffed, in a ragtag, pseudo-'80s Hong Kong cinema kind of way) to be sure, but have a distinct flavor of scrungy, B-level video game icons with a rather limited range of functions.

Slate is a movie I would love to root for: it has a refreshing premise, an attitude that nicely balances tongue-in-cheek genre geekdom (I loved details such as the masked, black-clad underlings of Priest making squeaky, duck-like noises in lieu of human voices, a la the "combat personnel" from the Kamen Rider series, and the ways in which self-important, domineering figures— the head villain Tae Pyeong-so, for one— in the fantasy dimension are consigned to the minor roles in the "real life" one— the same actor appears as a snack cart owner barely noticed by Yeon-hee) with sincere love for filmmaking and a slew of attractive actors spearheaded by An Ji-hye.

However, the hard-nosed critic in me is compelled to point out that the film suffers from some defects, more evident if compared to the similarly low-budget genre films concocted by the likes of Ryoo Seung-wan. Even though Jo's screenplay does not waste much time on spurious descriptions of the fantasy realm, the latter's jerry-rigged, abandoned-movie-set allure gets quickly exhausted once the main narrative is on the way. For most of the film, the characters appear to be merely playacting the denizens of an alternative world than actually living in it, which might have been a directorial intention given the (no doubt) tiny budget, nonetheless hampering our investment in the heroine's predicament.

More importantly, the action choreography itself is busy enough but does not quite grab you. It is true that I have previously expressed displeasure at the Asia Extreme excessiveness of such Korean films as, say, The Villainess, but Slate has the opposite problem. The latter's action is neither particularly graceful nor viciously attention-grabbing. It would have helped if the villains were given some interesting attributes that went beyond their lugubriously predictable "villainous" qualities. Likewise, Jo Sun-gi's Demon Slayer is a missed opportunity: he ends up being redundant, neither a credible threat to Yeon-hee nor a senior super-hero who can show her the ropes.

Despite these problems, I would still recommend Slate to fans of Korean genre cinema, albeit with carefully calibrated expectations. Think of it as a minor-league meta-cinematic exercise in micro-budget genre filmmaking, its considerable if somewhat B-grade charm perfectly represented by its key prop, a Joseon-dynasty-style clapper, which also allows you to travel inter-dimensionally to a movie-world. Like it, Jo Ba-reun's film is ridiculous and chintzy but, if taken with the right frame of mind, somehow capable of bringing a smile to an Asian/Korean movie fan's face.      (Kyu Hyun  Kim)